The Design and Development of the RB1 Fly Fishing Reel.

Manufacture of Fly Reels in the UK had ceased so the main objective was to bring the manufacture back to the UK to give the public chance to obtain a Reel manufactured in the UK. 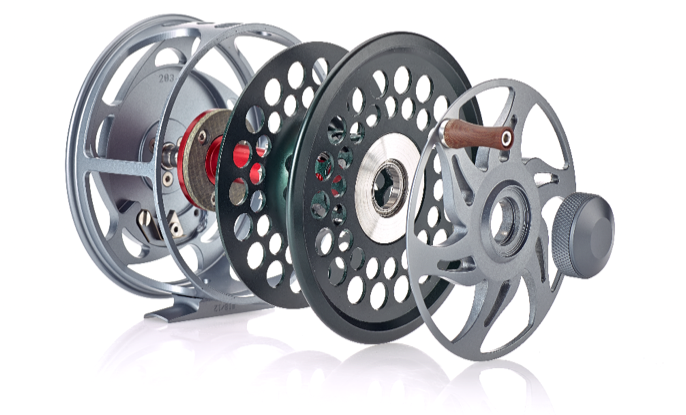 The Research and Development.

With an ocean of fishing reels to choose from why pick, the newcomer on the scene, the RB1. We had to feature a stand out attribute that would differentiate the Reel from others in the market, it was decided to try and incorporate an anti-reverse system within the Handle assembly.

To define this it basically means that once a fish has been hooked or the fisherman is extracting line the handle does not rotate. This has not been designed within a reel before and is very practical preventing your fingers getting hit by a rotating handle, which can sometimes be at speed.

Initially, we looked at other reels on the market to determine a manufacturing budget, we could then gauge a retail price for our new and fast developing reel.

Another critical feature for any reel is the braking system which has to be able to withstand some immense pressure. The larger game fish in the ocean can be enormous, the fastest being the sail fish which can exceed speeds of 68 mph and grow over 3.4metres in length.

Without a good braking system, it can be dangerous and fishing for these fish would be impossible. Consequently, the brake system design and the materials used are critical.

In an effort to try and duplicate the effects a fish would have on a reel, test rigs were designed and built and implemented on lathes. What became apparent during testing was the heat build-up once the drag was implemented on breaking. Not only did the design need to be improved but the materials we had specified for the piece parts also needed to be revisited.

The main problem was the Anodising rubbing off the Spool under friction. The decision was made to re-design the Spool. After a design rethink Titanium inserts had been developed to try and resolve the problem. Two sets of prototype inserts were manufactured to prove this design.

The prototype was almost there but for a wearing issue when the drag was initiated, the design was looked at again, new friction pads were put into place made from a different material which showed much better durability and performance, these results were conclusive after testing the modified prototype, the final design was now ready for manufacture.

With the design now complete, three prototypes were manufactured to validate the assembly and the proposed finishes. The final results and feedback were overwhelmingly successful and the RB1 design was verified, put into production and distributed across the UK.

Extremely popular magazine amongst keen anglers, Trout and Salmon, chose the RB1 as their favourite reel out of fourteen that were tested in the £400+ retail category. This was a massive accolade as it was competing against all of the top brands in the fishing reel industry.